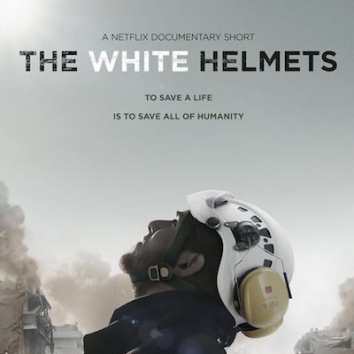 “All lives are precious and valuable”

The Syrian refugee crisis is a topic that is being widely discussed around the world. Pretending it hasn’t become fuel for political propaganda would be wrong of me, so I will briefly talk about that before reviewing the documentary. We’ve seen politicians talking about how our countries are “full” so we can’t help out those in need, and how refugees are “dangerous” and should “go back to where they came from”. I find it difficult to remain impartial when I see no evidence to back up these claims. When you’re greeted with a horrible situation like this, it’s hard not to think about what you’d do if your country suddenly became a war zone. It infuriates me when people act like refugees want to risk their lives and leave behind everyone and everything they’ve known, so they can feel safe again. It is a choice no one would ever want to make, but know they had to if they had any hope of survival. I don’t think I’ll ever be able to understand why you’d speak so rudely and dismissively of people who have lost their homes, workplaces, many of their loved ones, friends… the list goes on.

But this isn’t an essay on my political views, and regardless of your own views I believe this film is worth a watch as it provides a very gritty, and very real look at what’s going on in Syria. I hope it instills some compassion in you, even if it’s just a small amount.

The White Helmets is a Netflix original documentary with a runtime of just 40 minutes. It centres around a group of volunteer rescue workers who come from a variety of backgrounds.The film features a variety of talking heads, all members of The White Helmets and people that experience atrocities every single day. They’re very honest about their experiences and all have harrowing stories to tell. The on screen titles show the spectator the jobs these individuals used to have, and it broke my heart every time I saw a lost career flash on screen. Much like the volunteers we see in our societies, many of these people have no experience and are willing to put the lives of others above their own. So far they’ve saved over 82,000 men, women and children, and 154 members have been killed in their attempts to save others. One of the men in the documentary explains that he wants to “save everyone, young or old” because “he considers them to be his family”.

Director Orlando von Einsiedel doesn’t shy away from the harsh reality; this isn’t a film where things will be presented to you through rose coloured glasses and pretty editing. This is a film where you’ll witness screaming child, every falling bomb, every panicked voice. There is a scene where you’ll see a one week old baby being lifted from underneath rubble, and another where you’ll see a child begging his dying father not to leave him. There is no sugarcoating here. The film deals with so much that it’s hard to believe it has such as short runtime, and I found it to educational and important despite its length. It provides its audience with a very frank discussion about the war torn country that was enough to bring me to tears. It was exactly what I expected from the documentary, I knew this wouldn’t be one to sit back and watch with a bag of popcorn, it was one that I had to focus on and treat with respect.

I don’t feel like it’s appropriate for me to sit here and criticise the film as this is certainly a film where the story comes first, and the quality of the production second. It’s so important that we identify with the people on screen as fellow human beings, and I believe The White Helmets did this perfectly. I cared about everyone I was watching and I wanted to hear their stories, no matter how painful they may be. I do wish the film had been a bit longer and had gone into more detail about certain things, but this is a minor criticism and does not detract from the importance of the film.

The Oscars is often filled with stories of escapism and glamour, and whilst there’s nothing wrong with that, I was pleased to see a film like The White Helmets honoured with an award. Films can be used as educational tools as well as entertainment, after all. If you want to learn more about the crisis these people are facing, I urge you to watch this film. It is not an easy watch, but I believe it’s a necessary one.