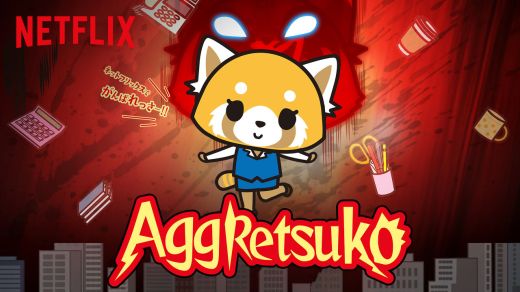 If that title hasn’t immediately grabbed your attention, I don’t know what will. As soon as I saw promos from the series on social media I knew I had to watch it. It’s a concept so unique and so quirky that it’s hard to ignore. Each episode clocks in at about 15 mins each so it’s a very easy show to binge watch. (which I absolutely did)

Aggretsuko follows Retsuko the red panda as she struggles to deal with a thankless, toxic office job and annoying coworkers who just won’t leave her be. Whilst she looks adorable and sweet, Retsuko lets out her anger by going to a local karaoke bar in secret, and screaming out death metal lyrics that reflect her everyday frustrations. Despite being an anthropomorphic animal, she is a relatable character for many as she repeats the same routine day in day out, and is too afraid to stand up to her superiors so just takes any abuse or annoyances hurled at her.

Unlike more far-fetched animes, Aggretsuko takes a generic, real life story and makes it hugely entertaining. It does utilise a lot of the familiar styles that we see within anime, so it is still very Japanese in nature and a lot of the characters fit within the kawaii art style. When you juxtapose this cuteness with sudden scenes of red, fire, and angry death metal, it is incredibly amusing. Retsuko is the epitome of “don’t judge a book by its cover” and because of this, becomes a hugely likeable series protagonist.

Thematically, the show deals with a lot of serious life issues such sexism, workplace stress, hierarchy, social anxiety, and more. It goes deeper than just an animated panda screaming some metal songs, although this is the initial appeal for many. In a way it reminded me of the utterly wonderful BoJack Horseman due to anthropomorphic characters, serious themes, and the satirisation of familiar everyday things.

In my opinion, it is also one of the few Japanese animes that has a strong English dub, and I believe this show can be enjoyed either subbed or dubbed, the quality remains the same. All the voice actors used throughout are perfect for their characters, and they used a separate heavy metal vocalist to voice Retsuko when she’s belting out angry lyrics, meaning all the musical numbers end up sounding amazing.

Aggretsuko takes its rightful place amongst “adult cartoons”, bringing uniqueness, cute animals and relatable content with it. If you’re looking for your next binge worthy series that won’t take up much time, I seriously recommend you give this a go. I don’t even think you have to like heavy metal music to fully enjoy it, so you might be pleasantly surprised.

One thought on ““Aggretsuko”: A Netflix show about a death metal loving red panda”

Bong Joon-ho’s @parasitemovie has dazzled fans all over the world and picked up plenty of awards. • It could make history if it wins Best Picture at #Oscars2020 as it will be the first non-English language film to ever win that award! 🏆 • Frankly, it’s a stunning achievement in filmmaking and I’d recommend going in with as little knowledge as possible to get the full effect. This film will be discussed for many years to come, I’m sure of it. 👏🏻 • Full review at the link in my bio! • #academyawards #oscarseason #filmawards #parasite #2020films #bongjoonho #bonghive #parasitemovie #koreancinema #koreanfilm #southkorea #filmisnotdead #filmfans #filmcommunity #filmmaking #cinephiles
Great Gerwig’s adaptation of classic novel #LittleWomen is a cinematic delight, and I was surprised at how much I enjoyed watching a period drama! • The film has a brilliant cast made up of Oscar nominated @florencepugh and Saoirse Ronan, as well as Emma Watson and Eliza Scanlen as the March sisters. This ensemble cast really brings the film together with their sisterly antics. For me, Pugh especially stole the show and I’ll be rooting for her on Monday. 🤞🏻 • Naturally the costume design is gorgeous too and is probably one of my favourite things about Little Women 🥰 • Full review at the link in my bio! #academyawards #oscarseason #filmawards #littlewomen #2020films #gretagerwig #florencepugh #saoirseronan #emmawatson #elizascanlen #filmisnotdead #filmfans #filmcommunity #filmmaking #cinephiles
With #Oscars2020 right around the corner, I’m going to be sharing my thoughts on some of the major nominees. 🤗 🏆 • If you missed my @1917 review, it’s up on the blog and I definitely consider it to be a masterpiece! And with plenty of nominations such as Best Picture, Best Original Score and Best Cinematography, I’m keen to see how it performs. • Big shoutout to @jazzrum for the new review template, it’s looking brilliant 🔥❤️ • #academyawards #oscarseason #filmawards #1917movie #2020films #sammendes #rogerdeakins #thomasnewman #film #filmfans #filmisnotdead #filmfans #filmcommunity #filmmaking #cinephiles
War never changes. ☢️👍🏻 • Heading to London for the day to see some museum exhibitions and drink good coffee. Hope everyone has a nice weekend. 💕 • #filmblog #filmblogger #filmfans #filmlovers #films #videogames #geeklife #fallout #falloutnewvegas #fallout3 #vaultboy #nukacola #gaming #consolegaming #vaulttec
Absolutely blown away by this stunning Clarice Starling portrait by @rewindmoviecast 😍 • After listening to and very much enjoying their Silence of the Lambs episode, they were kind enough to offer me the drawing used as their podcast cover art. I’m so happy to add it to my collection! • The Rewind Movie Podcast takes a look at the films that kickstarted their passion, and determines whether they’ve stood the test of time and are still worth watching today. I highly recommend listening! • Each of their episode cover arts is a hand drawn character from that film and it’s a really lovely touch. 😊 • #filmblog #filmblogger #filmfans #filmlovers #films #filmpodcast #claricestarling #silenceofthelambs #jonathandemme #classicfilm #hanniballecter #supportfilm #podernfamily #podcast #horrorfilms #art #portraitart
Big shoutout to @soulandsoap for their brilliant Shark Attack bath bomb! 🦈 🩸 • #filmblog #filmblogger #jaws #youregonnaneedabiggerboat #sharkmovies #iconicmovies #filmfans #bathbomb #bath #bathtime #bathproducts #filmisnotdead #crueltyfree #vegancosmetics
%d bloggers like this: