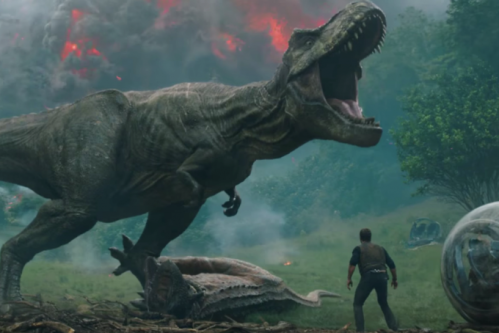 After really enjoying Jurassic World back in 2015, I was excited when they announced that a sequel was in the works. I felt optimistic about it because the ending of Jurassic World left it wide open for a story continuation, and I didn’t feel like they were just making a new one to milk a franchise. It’s no surprise that I can be hugely critical of sequels, but I was willing to give this one a fighting chance.

Jurassic World: Fallen Kingdom is set three years after the destruction of the Jurassic World park, and characters are faced with the dilemma of what to do now a volcano on the island is beginning to erupt. It’s a huge moral dilemma: let the dinosaurs die again, or move them to a safe location where they can thrive. Ultimately, Claire and Owen end up back on Isla Nublar with the help of a rescue team to round up the dinosaurs. As you can expect, things don’t go according to plan and we soon realise the rescue team has other, darker intentions.

Whilst this film is not the strongest in the franchise, it’s still an enjoyable watch. I wasn’t expecting it to be as thought provoking as it was, which was a pleasant surprise. I felt like the storyline had a lot of depth to it, and a lot of emotional moments too. One thing I really love about the Jurassic franchise is how they make you connect and feel emotions towards CGI dinosaurs. You know they aren’t real, yet you get so invested in the narrative that you quickly forget. In Jurassic World: Fallen Kingdom we see some familiar dinosaurs from the previous films, as well as some new ones too. In classic Jurassic nature, we also see a brand new dinosaur that humans thought was a good idea to create… for some reason.

Another thing that surprised me was the horror-like elements that were present in the film. Without giving too much away, there’s a couple of scenes that are very reminiscent of classic horror and plummets the film into a much darker, creepier atmosphere. These scenes were incredibly well done and didn’t feel out of place, even though they could’ve easily felt too jarring. It was fun to witness the franchise experimenting with this, and enhances the scary side of the dinosaurs. There’s some really impressive shots during these scenes too, that emphasises the imposing nature of these creatures.

My biggest criticism of this film is that I felt like too much was going on, and consequently the narrative felt rushed. Despite it running at just over 2 hours, I almost felt like we needed another half hour to properly tell the story without glossing over some really important plot points. The main narrative was paced okay but then we had random side storylines that seemed unnecessary and just left me confused more than anything. It’s a shame they tried to cram so much into such a short space of time as there was no need to do that.

Long time fans of Jurassic Park should definitely give this a go as I think it’s a solid entry into the franchise, though it doesn’t do enough to ascend above its predecessors. It’s what I’ve described as a “fun, Monday night film” to people who’ve asked, so if you’re looking for a visually impressive blockbuster with loud roars and some creepy elements, this film is perfect for you.